Our developers are constantly pushing out new updates for Airtime Pro. This week’s update includes a number of optimizations aimed at making Airtime faster and more responsive. We’ve reduced the overall average page load time by almost 50% and made significant improvements to the responsiveness of the ‘Now Playing’ screen. The changes will be especially noticeable if you’re a heavy user of the ‘Now Playing’ screen and have a full 24-hour schedule, where some actions are up to 3X faster than before.

Reduction in load time for key pages with the optimizations in this week’s Airtime Pro update.

We accomplished these performance improvements by starting with rigorous in-browser profiling, and then by improving key code paths or interactions that had high impacts on load times. Our optimizations involved significantly reducing the number of requests required to load all data on pages, optimizing our JavaScript and DOM manipulation, and lastly optimizing certain frequently called functions in our backend PHP code. 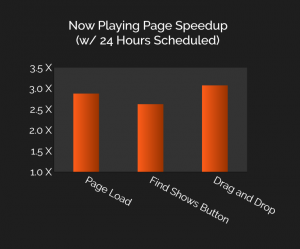 Reduction in load time for key actions on the Now Playing screen, with 24 hours of content scheduled.

Getting worry-free enhancements like this is one of the benefits of hosting your radio station with Airtime Pro, and we’ve got plenty more in store for the coming months.

Load time benchmarks were performed in Chrome 41 on an Intel Core i5 with 6 GB of RAM, on Ubuntu 14.04. All stations were hosted on Airtime Pro.