Turn up the volume in Airtime 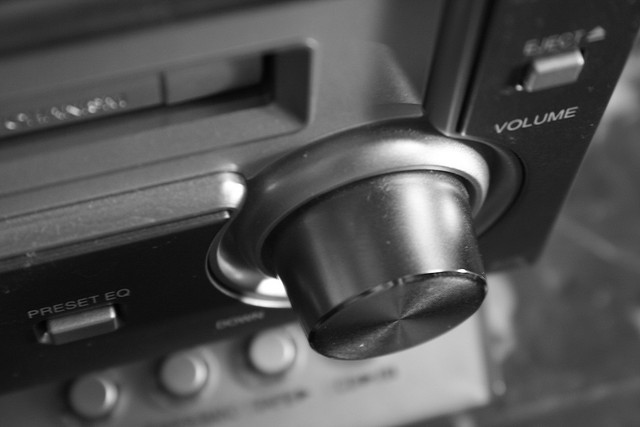 Sometimes I get asked if Sourcefabric’s Airtime broadcast automation system includes a compressor or a limiter in the output stage. I’m glad to report that it does not. It might seem like a purely technical matter, but this issue really has a major impact on the way that people experience music on the radio. Airtime does not need to compress or limit music, because contemporary digital music is already suffering from greatly reduced dynamic range.

Back in the vinyl days, there was a maximum loudness a recording could reach before the stylus would jump off the record, and so a ‘mastering engineer’ was employed to supervise the production of the master discs used in the vinyl stamping machine. As CDs became the norm, mastering engineers found ways to make the average sound level higher. They figured out how to do this without breaching 0dBFS, the new maximum level imposed by digital audio systems; exceeding this limit produces clipping, a distortion which is unpleasant and fatiguing to the human ear.

While the peak level of an audio CD cannot go any higher than 0dBFS, the average level has crept up steadily over the last 25 years. This is generally assumed to be for commercial reasons, because in a direct comparison, the average human will prefer a louder track to a quieter one. There’s been a kind of arms race to make the loudest, brightest recordings possible, and when records are played on the radio, even more processing is applied at the broadcast end of the chain. Flip between a pop radio station and a classical station on FM, and you’ll hear a massive difference in average level. This is because of what is known as dynamic range. The classical recording has a high dynamic range, which means there are some very quiet parts – like a vocal solo – and some extremely loud parts, when all the instruments in an orchestra are going at full blast. By contrast, most contemporary music records are made to be loud all the time, which means that their dynamic range is relatively small. Instead of quiet, loud, quiet, it’s loud, really loud, extremely loud, using every trick in the digital audio book.

There’s a growing consensus (among people who care) that some of these techniques are being over-applied in the pursuit of subjective loudness, which equates to a high average level. You can examine the waveforms of commercially mastered CDs by ripping them to WAV format and opening them in Ardour. If there’s no headroom between any of the peaks and 0dBFS, and there’s a dense lump of data in the middle of the waveform, the CD has probably been hard limited. This is the crudest way to raise average level – just slice off all the peaks, and boost what’s left. It’s not all that different to clipping done on purpose. You can say goodbye to musical subtlety, and hello to a headache in about five minutes time.

In the extreme and rather ridiculous juxtaposition which follows, we’re going to look at Peter Lawson’s recording of Erik Satie’s Three Gymnopédies for EMI (CD-CFP 4329). This was recorded on analogue tape at the Wigmore Hall in London during 1979, and remastered for CD at the famous Abbey Road studios in 1989. Then we’re going to load up Snoop Dogg’s track Doggfather, from the 1996 album Tha Doggfather, on Death Row/Interscope (IND-90038), right beneath it.

Three Gymnopédies is at the top, Doggfather is underneath.

Firstly, we can see that the Satie recording has a great deal of headroom. It could be one of the quietest recordings ever released commercially on CD. The neophyte might ask, “why didn’t the engineer at Abbey Road simply run this track through a ‘normaliser’ plugin to boost the level?” The reason is that professional mastering engineers don’t rely on a plugin to calculate and apply the maximum possible gain to each track. They listen to the material first, then adjust track levels by ear until all the tracks play well together. The engineer in this case may have decided that Three Gymnopédies, being a very softly played solo piano piece, deserved to be quiet. There are louder tracks coming later on the CD, and so making the opening track quiet preserves the natural dynamic range of the instrument. There is no law which says that dynamics processing has to be applied at all. But stick this CD on the average car stereo in rush-hour traffic, and many people will wonder if the speakers are broken.

By contrast, the Snoop Dogg recording is not only peaking at 0dBFS on every kick drum hit and hand clap, but the average level is many, many times higher than the Satie recording. True, you can hear the song clearly, even when the volume control on your amplifier is turned down low, but the hand claps sound very harsh, and any dynamics present in the studio mix have been squashed flat. What we’re aiming for is a happy medium between these two extremes, with enough processing to enable a mix to be heard, but without damaging the qualities that the musicians were able to hear during the recording.

Of course, some records deserve to be played loud. But by over-using limiting techniques, the record label has made that decision for you. Excessive processing during the CD mastering stage may be one reason why many critical listeners still prefer the ‘warm’ and ‘natural’ sound of vinyl, even though the vinyl mastering process can produce artifacts of its own. Consider that a complex musical waveform is the product of many superimposed sound waves, of various shapes and frequencies. It usually ends up looking something like a sine wave, but with lots of smaller ripples in it. Using hard limiting, all the musical information over 0dBFS is lost, and only a flat-topped waveform remains. It’s a bit like having the complete works of Shakespeare, except with every fourth word replaced by ‘blah’:

Shall I compare blah to a summer’s blah?

And summer’s lease blah all too short blah date

You’d get pretty sick of hearing the word ‘blah’ by the end of a three-hour play. Your ear feels the same way about square waves.

Fortunately, there are now technical solutions. Airtime can be configured to support ReplayGain, which means that over-compressed and over-limited tracks do not sound louder at playout time than tracks with better dynamic range. This technique cannot reverse sonic damage caused at the mastering stage, but it removes the incentive for record labels to insist on louder mastering. As to the question of how loud is loud enough, the European Broadcasting Union now provides Loudness Recommendation EBU R128 as guidance for broadcasters. Fons Adriaensen has released an EBU R128 meter for GNU/Linux which also has a command-line file analyser. So let’s back off that compressor, give the limiter a break, and turn the volume knob clockwise!